Power can be defined as the amount of work completed in a given amount of time. Watt (W), which is derived from joules per second (J/s), is the SI unit of power. Horsepower (hp), which is roughly equivalent to 745.7 watts, is a unit of measurement sometimes used to describe the power of motor vehicles and other devices.

Power is a scalar quantity. Since power is always a function of labour done, it follows that if a person's output varies during the day depending on the time of day, so will his power. Here, the concept of average power is introduced. In this article, let's examine power, average power, unit, and formula.

What does Average Power mean?

Average power is calculated by dividing the total energy used by the total time required. The average quantity of work completed or energy converted per unit of time is known as average power.

The rate at which work is performed on an object is referred to as its power. Power is a temporal concept. It has to do with how quickly a task gets completed. The power equation is described below.

The standard metric unit for power is a Joule / second, sometimes known as a Watt and abbreviated W.

A body is said to have one-watt power when it can produce one joule of work in one second.

A watt is equal to one joule per second (s)

Horsepower (hp) is a different type of power, with 1 hp equaling 746 W.
[ML2T3] is the Dimensional Formula for Power.

An object's work (W) can be calculated by multiplying its force by its displacement, and the power formula for force is as follows:

F is the necessary force, and

s is the object's displacement.

Since the object's velocity is given by v = s / t

Hence, the above relation is known as force-velocity equation

How can I Convert 120 Watt-hours to Milliwatt-hours

You can easily convert Power from one unit to another units (Watt, Milliwatt, Kilowatt, Megawatt, Gigawatt) freely by using our Online Power Converter tool. For example, You want to convert 120 Watt-hours into Milliwatt-hours, you  can simply enter 120 in value box then choose unit from the second box and click on Calculate button. 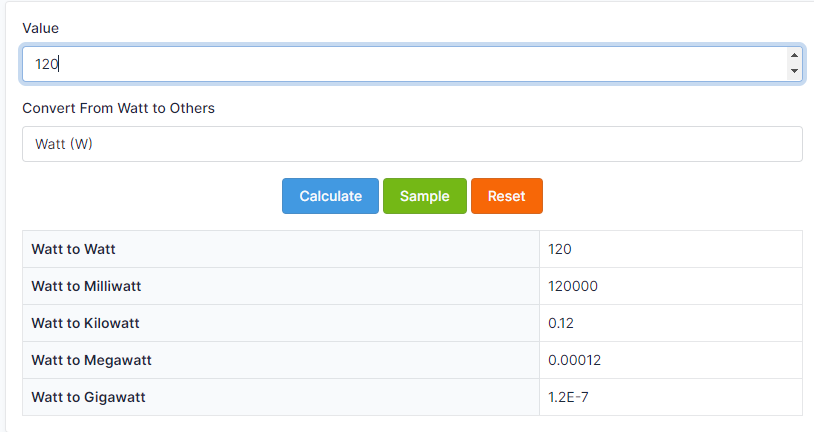 "Success isn’t Always about Greatness. It’s about Consistency" - I Noor Muhammad founder of RaviHost. FreePion is a proud product of RaviHost. We at RaviHost are fully determind to provide you 100% free SEO and digital marketing tools. You can use our tools for free and recommend to your friends.