The ancient number system known as oman numerals is still prevalent worldwide. The fixed positive numbers are represented by alphabets in roman numerals. I, II, III, IV, V, VI, VII, VIII, IX, and X are roman numerals that stand for the numbers 1, 2, 3, 4, 5, 6, 7, 8, 9, and 10 respectively. 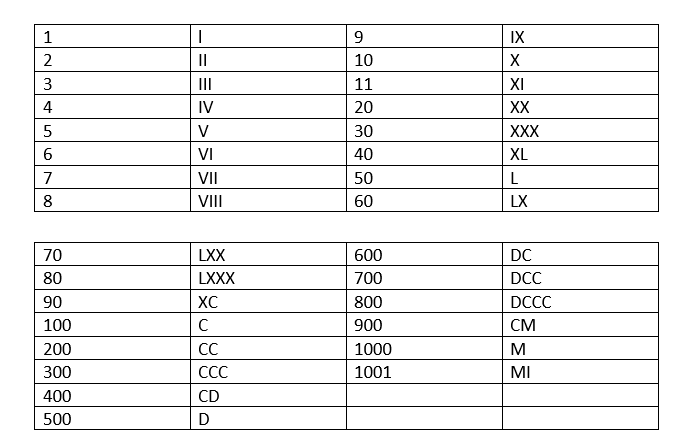 Now, when we use the Roman numeral letters in place of these numbers, we obtain;

For instance, MMXIX is how the year 2019 is written.

Why Is It Important to Understand Roman Numerals?

Roman numerals are still used today in a number of contexts, so learning how to read them is essential.

Here are three common instances where Roman numerals are used:

Roman numerals are frequently used instead of Arabic numbers on analogue clocks, such as Big Ben in London, to give them a more conventional or vintage appearance. (Take note that a lot of Roman numeral clocks display 4 as IIII rather than IV.)

Roman numerals are commonly used to indicate a film's release year at the end of the credits and on the backs of DVD and Blu-ray cases.

Super Bowl: Every year, Roman numerals are used in the advertisements for the wildly popular Super Bowl (the only game to date to not utilise Roman numerals was Super Bowl 50, perhaps because L isn't an appealing-looking numeral on its own).
Roman numerals are definitely worth spending some time learning, especially if you want to work in football or film production, even though Arabic numbers are much more prevalent (pardon the pun) in terms of the range of contexts in which they're employed.

"Success isn’t Always about Greatness. It’s about Consistency" - I Noor Muhammad founder of RaviHost. FreePion is a proud product of RaviHost. We at RaviHost are fully determind to provide you 100% free SEO and digital marketing tools. You can use our tools for free and recommend to your friends.